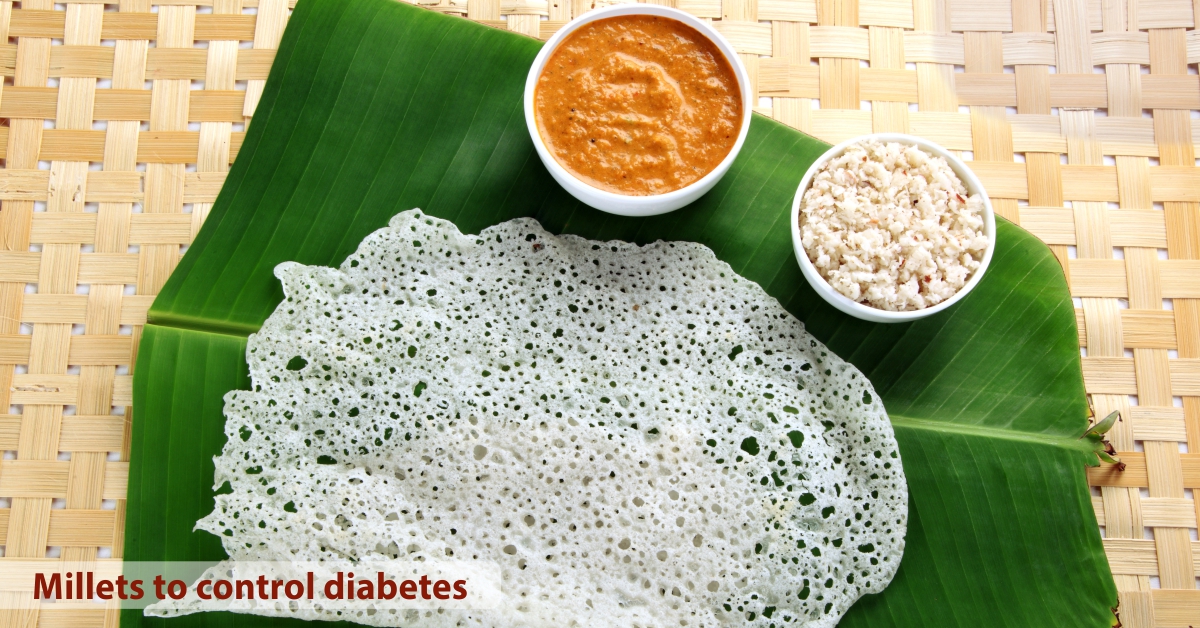 It might be a major aspect of cultural identity, but the consumption of white rice and other refined grains has led to an increased incidence of type 2 diabetes in South India. However, diabetes specialists in Bangalore along with dieticians and diabetes educators are digging deep into the rich heritage of millet cuisine of Karnataka to address the issue of a proper food for diabetics.

Rise of the rice and type 2 diabetes

Remember your grandparents and why they had no chronic illnesses or non-communicable diseases like diabetes, hypertension, or hyperlipidemia (high cholesterol)?

Apart from the fact that they did not face urbanization, and there was no rampant use of fertilizers and pesticides, the diet they had was diverse. To begin with, most of these people did not consume the varieties of rice we now consume and that rice was not polished.

The food they consumed was diverse even though they used to consume local produce and never heard of blueberries, hazelnuts, or the Noni juice of Tahiti. Their diet was full of seasonal vegetables and fruits, lentils, rice, wheat, and of course generous amounts of millets. They used palm jaggery and used sugar sparingly as a treat only during festivals.

As the demand for higher agricultural outputs increased, the use of fertilizers and pesticides increased. Moreover, the perceptions of people regarding food changed. Rice was considered as a better food when compared to millets.

With the arrival of newer varieties of rice and the increase in its consumption, more and more people fell prey to diabetes. Now, neither our love for rice nor its consumption has reduced.

Why does rice consumption increase the risk of diabetes?

Many studies and researches have time and again proved that consumption of rice coupled with sedentary lifestyles and lack of exercise increases the likelihood of type 2 diabetes multifold. It was found that people consuming around 400 grams of rice are in the very high risk groups.

Diabetologists in Bangalore say that the presence of refined carbohydrates in rice is instrumental for high blood sugar levels. Rice is a food with high glycemic index not just because of its intrinsic nature, it is the process of milling that also adds to the misery.

Most of the vitamins, minerals, and fiber content is removed in the milling process of rice for its cosmetic appearances and robs its non-diabetic property. Also, lifestyle factors like fast eating can increase the risk enormously.

So, should you stop consuming rice? When asked, our diabetes specialists in Bangalore reiterate that we need not stop consumption of rice, but have to limit its consumption. Switching over to millets along with consumption of brown rice is beneficial.

How to control diabetes with millets

Millets, the small seeded grasses, which are grown as cereal crops have numerous health benefits. In India, pearl millets, finger millets, foxtail millets, little millets, barnyard millets and sorghum have been in use for ages. They are gluten-free, loaded with protein and fiber, and are rich in vitamins, calcium, iron, magnesium, and zinc.

With a plethora of health benefits to offer like minimized risk of diabetes, and cardiovascular diseases, it is certainly food for diabetics. Millets essentially contain lower levels of amino acids and higher fat content. Notably, however, 75% of this fat is not harmful for your heart, but rather healthy. It contains very healthy polyunsaturated fat. Millets like Jowar, Ragi and Bajra made for a very important part of the Indian diet earlier. However, with the passage of time they were relegated to obscurity and replaced by their unhealthy counterparts like rice and wheat.

It’s slowly staging a comeback since we started appreciating the health benefits offered by it – once again!

Millets are prescribed frequently by diabetologists quite simply because they are particularly known to bolster diabetes management measures. The high fiber content of millet is responsible for slowing down the release of sugar in the blood stream. In fact, it would be more appropriate to claim that it slows down digestion – which results in the distribution of sugar at a more even pace.

By consuming millets on a regular basis, a diabetic can expect to steer clear from the dangerous spikes in blood sugar levels, which leads to numerous complications. Diabetologists keep prescribing millets to patients primarily because of its ability to minimize the risk of type 2 diabetes and cardiovascular diseases.

Apart from being very tasty, millets have a range of health benefits.

Millet recipes of Karnataka – the best food for diabetics

For long, Karnataka has had numerous delicious recipes with millets as their base ingredients. Taking forward this rich tradition of super foods, diabetologists in Bangalore along with our dieticians have delivered noteworthy outcomes when their patients followed the diet rich in millets.

Some irresistible recipes with millets:

In fact, millets are not just famous in Karnataka. The cuisine involving millets is as diverse as the country and each region has its own take on millets. For a person with diabetes, there is no dearth of tasty recipes with millets. So, it is time to change the perception that you have to limit yourself in terms of quality foods if you have diabetes.

Finally, it’s actually very important on your end to rely on a combination of lifestyle checks, dietary intervention and regular health screening if you are really willing to steer clear of the complications associated with diabetes in the first place.

Make sure you are accessing the best diabetes treatment so that you’re able to take the best foot forward when it comes to diabetes control via the right medications and the right advice on diet and exercises.