Is happiness Another Scoop of Ice Cream? – Managing Food Cravings in Diabetes 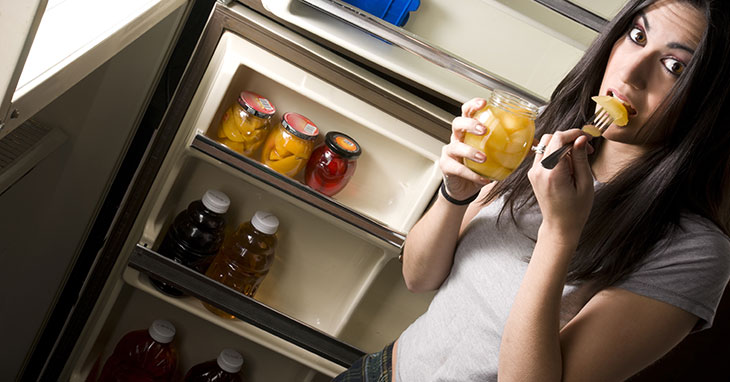 As if possessed, or moved by some strong primitive force, we raid the fridge in the midnight for another scoop of ice cream!

When you look at your diabetes diet menu and realize that you have gone south when you had to go north, you might perceive it in two ways – One you feel like a small child whose mischief is excused with a condescending smile. And two, you feel guilty that you are trapped in your childhood and cannot break free from temptation.

*See below for powerful tips to fight food craving in people with diabetes!

Sudden intense urges to gorge on junk food at odd times of the day (or night) seems to defy reason and all your plans to maintain a diet regimen goes for a toss. You gain weight, lose control over your blood sugar levels, and remain unhappy.

If this happens to you often, and you still do not hear any alarm bells ringing, you need to wake up. For people with diabetes, a tight glycemic control is a tightrope walk and one that needs to be done.

This might make you feel glum; however, if you understand the science behind food cravings, you shall become an acrobat par excellence – one who can dig into ice creams (occasionally) and one who knows how to control diabetes.

Movies, and sitcoms never lose an opportunity to show their protagonists guzzling beer or digging into creamy delights whenever they have had a breakup or are depressed. Well, that is when food is not the fuel, but a pseudo therapy; a compensatory mechanism that can be dangerous.

In extreme situations, these pseudo therapies can lead to food addictions. But, sometimes these food cravings might not actually be gluttony. You might be craving for foods due to some vitamin deficiency! Craving can also be an insufficiency of the mind. In fact, craving for food both in non-diabetic people and diabetic people can be of psychological and physical nature.

In the case of ice cream, the combination of flavors, sugar, fat, and dairy becomes irresistible for many of us. While having a sundae on a hot summer day makes sense, having intense desire to have ice creams for a dessert incessantly might be a sign of low sugar levels, vitamin or calcium deficiency, or plain craving.

Don’t worry about being heartbroken! Manage stress better with these techniques. See below

Craving Brain, and Eating out of Boredom – Psychological Food Craving

Like addiction to alcohol, smoke, and drugs, addiction to food is real and it does have a connection in the brain. There is certainly a strong connection between deep fries, chocolates, ice creams, sweets, and the human brain. They are the comfort foods for us.

Over time, the cells that receive the dopamine (dopamine receptor cells) tend to get saturated and you need to give them more stimulus. That means, you need to pump in more of those greasy fries, super slimy cakes, and velvety ice creams to get the same pleasure. Chasing your next high means more volumes now!

Food cravings driven by the mind when you are not hungry is called Hedonic Hunger. You end up eating foods you need to avoid with diabetes. This leads to obesity, poor control of diabetes, and a tumble down the rabbit hole.

Food for us gives a deep synesthetic experience. The mere aroma of a food brings back memories, churns up tastes, and rakes up appetite even though you are not hungry! Food reminds us of childhood, makes us nostalgic, and even creates unique familial identities.

With such a deep connection, it might sound really tough to break free from a food craving that’s psychological in nature. But, there are ways out and it’s vital you find them.

Craving, some say, happens like waves. There is an initial surge for instant gratification, which reaches a peak. This then dies out. But, for most people coping with the surge in desires in the peak stages is the toughest part.

The main objective of any therapy would be to reduce the motivation of the person to crave for the foods. A major aspect of this is Stress Management. Most people tend to eat foods indiscriminately when they are stressed. Many can avoid the side effects of diabetes with stress management as this would help them avoid taking unhealthy lifestyle choices.

This mainstay therapy for eating disorders concentrates on controlling the stimulus, creating aversion, and self-monitoring behaviors so that over time, people get over food cravings. By avoiding conditions that create the craving, and by creating different responses to such situations, one would have a better chance of getting over the food craving.

If you have specific food urges, there are chances that you might have a nutrient deficiency. Iron deficiency is known create meat cravings, magnesium deficiency creates chocolate cravings, and cravings for sugary foods are generally created due to a deficiency in phosphorus, tryptophan, and chromium.

• One who craves for chocolates should instead try seeds, nuts, and fruits.
• One who craves for sugary foods should opt for fresh fruit, chicken, vegetables, and raisins.
• People who crave for oily foods have a deficiency in calcium, and should instead opt for leafy vegetables.
• People who have an urge for salty foods should go for fish, nuts, milk, and seeds in order to replenish their chlorine levels.

There is a general deep yearning for sweets among people with diabetes that seems to defy logic. While a sweet is not always the best food for a diabetic patient, it is best to have one to avoid low blood sugar symptoms.

But, if people with diabetes do yield to their food craving, they might have an increase in their symptoms of high blood sugars, and have hyperglycemia. And, prolonged hyperglycemia can cause serious diabetes complications.

Unfortunately, one of the symptoms of diabetes is excessive hunger. This makes the job of a diabetic patient to control his/her hunger that much more difficult.

Here are a few powerful tips for people with diabetes to avoid food cravings:

Is it Hunger or Appetite?

If it is hunger, then your body really needs fuel to run. It is physiological. If it is appetite, it is more of a psychological thing. The next time you feel an urge to eat something, see if you have a grumbling sensation in your stomach. If yes, then you are hungry.

Eat foods that are full of aroma and flavor. That way, you would feel satiated and your psychological craving would be quenched!

Give yourself small treats. If you consider what foods to avoid with diabetes, you might feel you were given a raw deal by providence. But hey, you can enjoy your favorite foods in moderation once in a while. Control portion sizes and balance it with physical activity!

When you do have a compulsive need to eat something, hydrate or distract yourself. But, don’t do it too often, you might experience low blood sugar symptoms.

Remember, if you have craving do not neglect it and do not hesitate to consult a doctor for that!