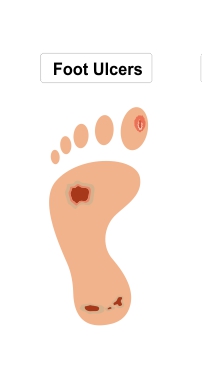 Diabetic foot ulcer is a condition that can slip into infections and foot amputations. It needs constant and continuous care not only to treat the condition, but to avoid further damage. In most cases, unmanaged diabetic ulcers lead to foot amputations and loss of limbs.

What is Diabetic Foot Ulcer?

Diabetic foot ulcer is a major diabetes complication that appear as open and exposed wounds that take a lot of time to heal. Along with diabetic neuropathy, peripheral artery disease, and diabetic foot infection, it is a major component of diabetic foot.

In this condition, skin does not grow back on the wound due to changes caused by diabetes. This leaves an open area with the inner tissue visible outside. Since diabetes causes poor blood flow and slow wound healing, these foot ulcers are not closed. An underlying cause for this includes diabetic dermopathy.

Diabetic Foot Ulcer – Who are at risk?

Care for diabetic foot ulcers depend upon the stage of the ulcer. It involves controlling blood sugar levels aggressively in order to improve wound healing. Exposed wounds are constantly cleaned and topical antibiotic ointments are applied. Since there is loss of sensation in the feet due nerve and muscle damage, orthotics and diabetes shoes are provided.

In latter stages where there is both nerve and blood vessel involvement, daily wound care, debridement, and vascular intervention is advised. When diabetic foot ulcers progress to diabetic foot infection, surgical intervention might be needed. There might be loss of limb due to amputation.

How to Prevent Diabetic Foot Ulcer